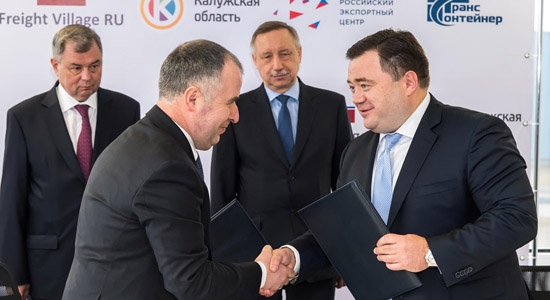 Today, finding the fastest and most efficient way of delivering goods is a vital objective, especially for the food industry. A solution to this can be provided by new transport and logistics hubs which can consolidate goods from various Russian cargo handlers. Vorsino is the first such center of this kind. As part of this pilot project, a railroad link with China will be established in cooperation with the Chinese company Sinotrans, Russian Railways, Russian Railways Logistics, and TransContainer.
On April 5, the first train will leave Vorsino station (Kaluga Region) for China via Zabaykalsk. Its consignment will be delivered to Shilong station (Guangdong Province) and also to the port city of Dalian, from where goods will be transported to other locations on feeder vessels. It is expected that this route will be highly popular among exporters, and lead to an increase of container trains over time.

This is a unique structured service, which has its own schedules, and its own economic parameters. The project provides convenience for producers, both in terms of cost and speed. A new flow of goods, a new line of business, is being established – one which will primarily benefit the SME segment. Analysis conducted by the Russian Export Center revealed that around 150 companies in the food and light industry sectors are interested in the project.

Petr FradkovCEO of the REC Group

A route has been engineered which will make it easier for companies to send goods from Russia to China. Whereas previously shipping times by sea were around 45 days, the railroad link will bring this figure down to just 14 days. This saving of time will lead to significant financial savings too. In addition, entrepreneurs will have the opportunity to go through customs, phytosanitary and other procedures immediately upon dispatch of goods from the terminal in Vorsino.

The project we are discussing today is changing the very concept of exporting: consolidation in a single location, and dispatch on fast container trains. There is demand for this new type of container service, and the exporters are there. We hope that this will herald the start of a regular, twice-weekly service.